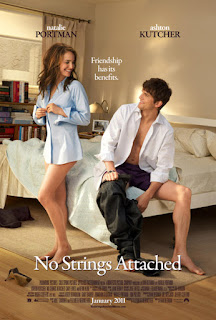 Chick Flick you say.... well yeah it is but I enjoyed it. I knew how it would end before I even walked into the cinema but for some reason I just can not help but watch the mind numbing feel good love stories.

It had me thinking about why we classify these type of movies as "Chick Flicks"?  My husband hates "Girly" movies and won't come with me unless I drag him, but I noticed the guy next to me with his wife was laughing along to all the jokes and seemed to be enjoying himself (really because his laugh was so loud I found it distracting).

The movie is about a guy & a girl who's paths continually cross and they decide to become friends with benefits, and they start sleeping together for fun, the deal is when one of them feels more they end it.... seems simple enough but as we all know it doesn't work and long story short they .... spoiler alert.... end up together - as if that was a surprise!

Even though the plot was predictable and it was a typical chick flick I found myself enjoying the movie and wondering how it would all work out.  I was laughing along with all the jokes and felt compassion for the Kutcher character Adam when his heart got broken.  It could just be due to the week I've had but I enjoyed just sitting and watching.