I was taught by my mother to never argue about religion, politics or sex... So writing this gives me a little anxiety in fear of an argument but if I don't get my thoughts out I might just explode!
The TV week logies were on last night. I've spent the morning watching speeches, reading speeches and reviewing social media comments & debates.  3 things Have come from last nights awards Waleed Aly's Gold logie win, Noni Hazlehurst's induction into the hall of fame & Julia Morris' fall, cursing on live TV & "I need a hero" redo.  Julia is really a comical non event but the other two have sparked debate in my mind and it seems on social media. 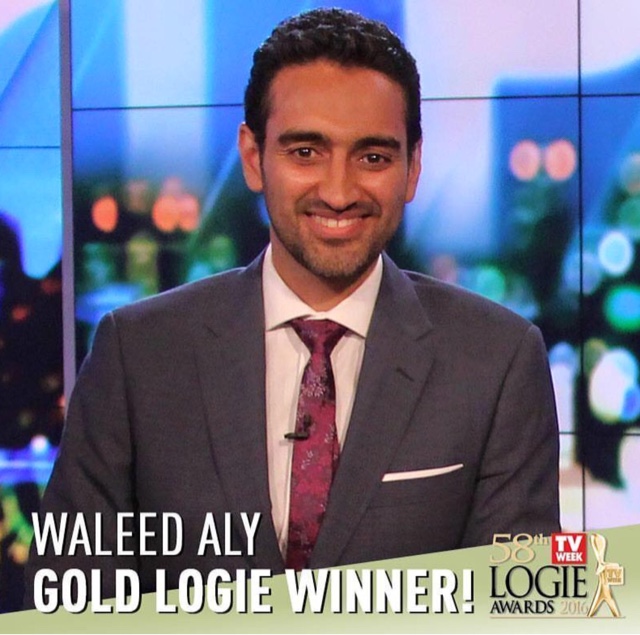 I watched Waleed Aly's speech before I'd read anything, I had tears in my eyes and it was because of three thoughts.
1. What a lovely multicultural list of nominees, if this was accidental how beautiful but the pessimist in me questioned was that created purposely after the oscars drama... Really why has it taken Lee Lin Chin so many years to be finally nominated
2. I'm so proud that Australia has voted for this man, he's a really strong multicultural, educated influence on Australian media.
3. I hate that people live in fear because of their religious beliefs, but how very brave of them.
Then I saw this 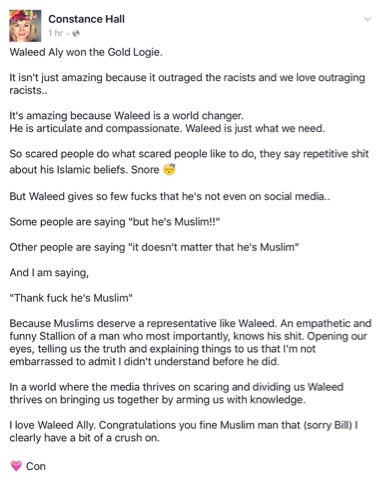 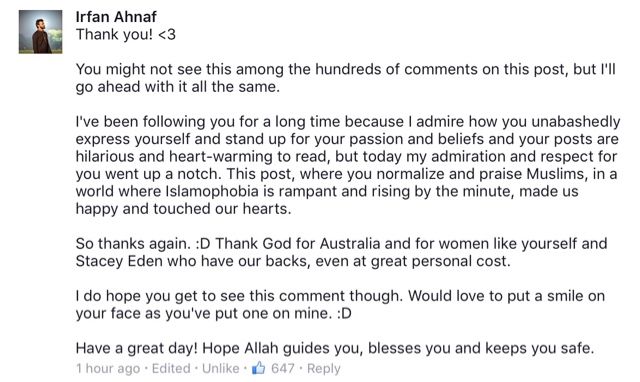 And once again I had tears, I kept reading it over and over trying to find words that would show Irfan that Constance was not alone, that I too believed that Waleed's win was historical, symbolic & important in Australia's acceptance of diversity. Thankfully someone wrote this

And I commented I agree, but then I continued to read the comments & I read things like "I don't like Waleed, so therefore I'm racist", " what does his religious beliefs have to do with his award" and "I don't like or respect him but it has nothing to do with his religious beliefs, I find him condescending & rude" and it took my thoughts to another place. Was he nominated because of his religious beliefs, should they even matter, he is strong in his beliefs and would he have been nominated otherwise? I dont watch the project but have seen a few clips & at times found him almost condescending, I just resolved it that it was due to his audience.  I was not sure if I supported Waleed's win for the right reasons especially after I watched Noni.
Noni Hazlehurst's speech on her induction into the hall of fame and I think she sums up the "...ism" debate perfectly for me. She sums up for me what I sometimes worry I'm being naive in thinking, why can't we look at the world the same way as a preschooler? Why can we not see inspirational, feel good stories rather than pessimistic & negative views. Why does our religious beliefs, race or even gender matter? How can we keep the bigoted views away from our kids?  And finally how is she only the second women to be induducted into the hall of fame? 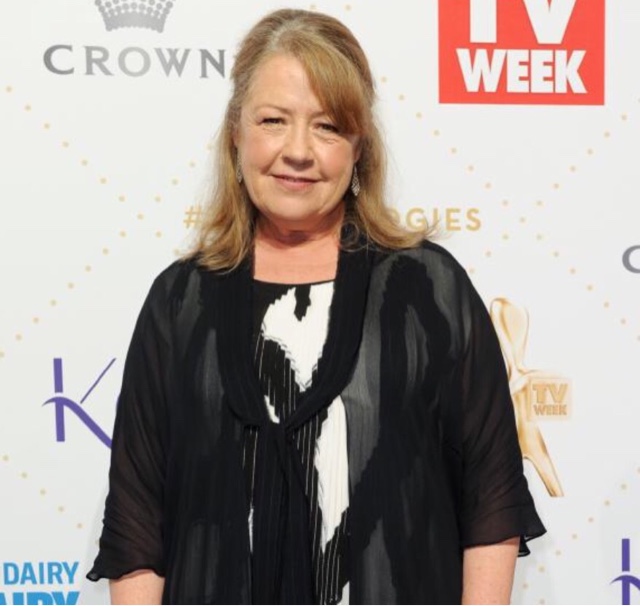 “I started to see a world through the preschoolers eyes to see how free and unafraid they are to just be,” she said. “They haven’t yet been conditioned. No child is born a bigot.”

Hazlehurst lamented a changing TV landscape, and the explosion of technology, made it hard to escape exposure to bad news and violent images — and she fears ‘our hearts are growing cold.”

“The fact that I’m only the second woman to be given this honour is merely a reflection of the prevailing guard — as is the suggestion from some quarters that the eligibility of esteemed colleagues Waleed Aly and Lee Lin Chin going for gold is questionable,” she said.

But, she said, things are changing — albeit slowly.

“The great thing about glaciers is if you’re not on them you go under. I’ve been riding that glacier for 40 years. And I’m staying on top of it.”

“I look forward to the day where it’s not an issue whether a man or a woman, or an Asian person or a Muslim gets anything in this country.

“We share more similarities than differences and I think I’m really keen to promote that idea because I think any other idea is divisive and potentially disastrous.”

So while I'm excited for this move forward of Australia we do have a long way to go and my parenting style and beliefs are not so naive. One day we will as John Lennon put it "live as one"